skip to main | skip to sidebar

What We're Reading: The Creativity Crisis

A recent Newsweek story reported on research that shows American creativity is declining. Torrance's Creativity Test scores of both adults and children, which were steadily rising from the time the test was created in the 1950's until 1990, have been declining ever since.

What's going on? The author suggests that the number of hours kids spend watching TV and playing video games are to blame. In addition, education's emphasis on testing and curriculum standards often leave little room in the school day for creativity and the arts.

Ironically, the report of diminished creativity comes on the heels of a May Bloomberg Business News report citing a new survey of 1,500 chief executives conducted by IBM's Institute for Business Value in which CEOs identified 'creativity' as the most important leadership competency for the successful enterprise of the future.
Posted by The Arts Council of Greater New Haven at 12:02 PM 5 comments

At Wednesday's Connecticut Arts Advocacy Day in Hartford, we heard from Erik Brown, Principal of Walsh Elementary School in Waterbury. Erik owes his career success to the arts. As a child growing up in New Haven, he struggled in school due to dyslexia. It was through the arts, through song and rhythm and story that he learned to read. His mother encouraged him to audition for the Trinity Boys Choir, and he was accepted. The arts took hold of Erik and guided him through his education. He went to Betsy Ross Magnet School and later Education Center for the Arts. (we subsequently learned that Representative Toni Walker taught Erik at the Dixwell Arts Center) This kid who was math challenged as an elementary student later aspired to be a math teacher. Instead he was offered a job teaching language arts. The teacher became a principal, one who claims he is "of the arts." This principal needs no convincing that the arts are valuable; he knows it. Erik Brown lives and breathes arts education. He made us all want to be kids again. 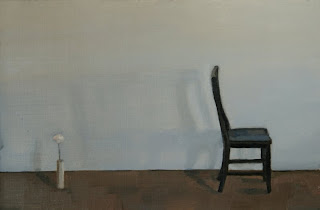 Paula Billup's painting "The Leaving" is on view, along with photographs by Meredith Miller, at Gallery 195 at NewAlliance Bank through June 4.

Image courtesy of Paula Billups
Posted by The Arts Council of Greater New Haven at 9:26 AM 1 comments

Image courtesy of Paula Billups
Posted by The Arts Council of Greater New Haven at 10:18 AM 1 comments

National Endowment for the Arts Chairman Rocco Landesman delivered a keynote address this week to close the 2009 national Grantmakers in the Arts conference: Navigating the Art of Change.

"Art works" is a noun. They are the books, crafts, dances, designs, drawings, films, installations, music, musicals, paintings, plays, performances, poetry, textiles, and sculptures that are the creation of artists.

"Art works" is a verb. Art works on and within people to change and inspire them; it addresses the need people have to create, to imagine, to aspire to something more.

"Art works" is a declarative sentence: arts jobs are real jobs that are part of the real economy. Art workers pay taxes, and art contributes to economic growth, neighborhood revitalization, and the livability of American towns and cities.

Chairman Landesman announced that he will spend the next six months learning and highlighting the ways that art works in neighborhoods and towns across America.

This national tour will begin on Friday, November 6, 2009 with a visit to Peoria, Illinois, at the invitation of Kathy Chitwood, executive director of the Eastlight Theatre, and Suzette Boulais, executive director of Arts Partners of Central Illinois. The Chairman's visit to Peoria will begin with a round table discussion about the impact of the arts that will be moderated by Carol Coletta, president and CEO of CEOs for Cities, and will include Peoria's political, civic, business, and arts leaders. It will also include a tour of Peoria's "warehouse district" and a performance of Eastlight Theatre's production of the musical Rent.

To help inform this tour, the NEA is hosting a blog at www.arts.gov where Americans can post examples and stories of how art works in their own communities. Chairman Landesman will also post dispatches from the "Art Works" tour on the website, beginning after his visit to Peoria on November 6.

"In the coming months, I look forward to seeing downtown sculpture gardens, art walks along waterfronts, public performances and exhibitions, adaptive reuse of abandoned buildings, and subsidized work spaces for artists," said Chairman Landesman. "Despite the economic realities we are all confronting, art continues to work."
Posted by The Arts Council of Greater New Haven at 2:44 PM 5 comments